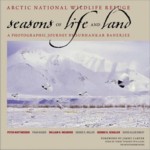 Recently honored with a 2003 Banff Mountain Book Festival Award . This book played an important role in the spring 2003 Senate vote to protect the refuge from oil exploration, and the photo exhibit has been shown at the American Museum of Natural History in New York and the California Academy of Natural Sciences in San Francisco.