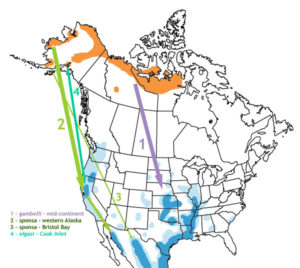 Four named subspecies are known from North America, three of which breed, but at least four breeding “population units” can be identified, so there is geographic variation that is not represented by the subspecies names. More information on these population units is in the post Distribution of Greater White-fronted Goose subspecies.

Relatively small and pale, with orange-pink bill. Averages slightly larger than Pacific birds, but differences are very slight and overlapping.

Smallest on average, nesting in western Alaska and wintering mainly on the Pacific Coast. Birds nesting in the Bristol Bay Lowlands, southwestern Alaska, may average slightly larger, and have a distinct winter range.

Relatively large and dark, with orange-pink bill. A very small and restricted population

Relatively stocky and dark, with orange bill and limited white on flank stripe and other markings. A rare winter visitor to northeastern North America

Greenland birds are fairly distinctive, although bill color (often incorrectly emphasized as the primary field mark) is unreliable. Variation in American birds is slight and overlapping, although most large and dark elgasi (Tule) can be distinguished from the small sponsa on their wintering grounds. Relatively large and dark birds can be found in any flock, anywhere, but determining whether these are from a different population (gambelli, sponsa or the Bristol Bay Lowlands), or confirming an extralimital record, is nearly impossible.

Identification of Greenland Greater White-fronted Goose is the subject of two blog posts:

The difficulties of judging bill color (as it applies to identification of subspecies of White-fronted Goose) is discussed in the post: Ambiguity and bird identification