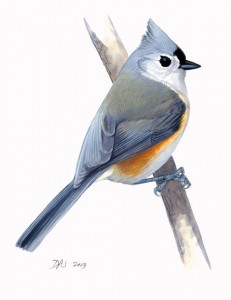 Pitch is simply our perception of the frequency (or wavelength) of a sound, which we describe as high to low. Birds’ range of hearing is similar to our own, and bird song covers the full range to the limits of human hearing, from the lowest hooting sounds of Great Gray Owl or Spruce Grouse to the highest songs of Blackburnian Warbler or Golden-crowned Kinglet.

Most bird vocalizations are complex, and cover a wide range of frequencies, and there is often considerable variation in pitch within a species, making it hard to use pitch alone as an identification clue. Even so, the general pitch of a bird sound is useful for getting into the right “ballpark” for identification.

In the two examples here, the rhythmic pattern of the two songs is similar – a simple two-syllabled phrase repeated several times – and the quality of both could be described as “whistled”, but the pitch of the Black-and-white Warbler song is much higher.

More useful for identifying a species is the relative pitch of parts of a song – upslurred or downslurred notes, or changes in pitch over the course of a song. This requires some practice in order to develop a discerning ear. Many species have very abrupt or very subtle upslurs or downslurs that are helpful for identification but difficult to hear. Paying attention to pitch changes as you listen to bird songs will quickly increase your ability to detect these changes.

Listen to the phrases of this Northern Cardinal song. The notes at the beginning of the song are distinctly upslurred, and the notes after that are sharply downslurred. Try to follow along in the sonagram to get a better sense of the “shape” of each note. As you listen for these features in other songs your ability to hear them will improve.

The sonagram shown above accompanying the Cardinal recording is simply a graph of pitch over time. Time advances from left to right, and sounds with higher pitch appear higher on the graph. The first three notes (at the left) begin low and end high, while the following notes begin high and end low. To learn more about reading sonagrams check out Nathan Pieplow’s excellent series beginning at http://earbirding.com/blog/specs

Unlike the sharply slurred notes of the Cardinal, the song of White-throated Sparrow is a series of clear whistles with almost no change in pitch. This, and the longer notes (slower rhythm), gives it a much more “gentle” quality than the Cardinal. The song of Golden-crowned Sparrow is also a series of simple clear whistles, very similar to White-throated, but one or more of those whistles changes pitch, creating a very different song. In these two species, and most others, such patterns of pitch change are consistent and offer some of the most reliable “field marks” for song identification.

The next installment will cover time as an identification clue.