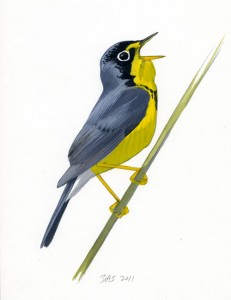 One of the simplest forms of bird song is the trill. Trills are comprised of a series of similar phrases, repeated rapidly on one pitch and at a steady rate. Pine Warbler is one of several species that is commonly heard giving trilled songs in Eastern North America.

The rate of phrases in the trill can be helpful for identifying the species, but details of the individual notes offer a more reliable way to identify the singer (more on that in a future post). The bird in the recording below alternates slow and fast trills, which can be confusing when you are trying to identify the species, but it’s a good opportunity to practice hearing the difference between faster and slower tempos.

Moving on to the more complex songs of other species, we can still hear obvious differences in tempo. Below are recordings of White-throated Sparrow and Canada Warbler. The song of Canada Warbler includes about the same number of phrases as White-throated Sparrow, but the phrases are much shorter and the whole song is delivered in about half the time. Adding to the impression of a very rapid delivery is the fact that the warbler’s phrases are sharply slurred, while the sparrow sings a series of clear whistles with no pitch change. We might describe the sparrow as “relaxed” and the warbler as “hurried”.

Finally, a more subtle example of different tempo is provided by the two species below (Song Sparrow and House Finch), Both sing varied songs – a mixture of clear whistled notes, trills, and buzzes – but the House Finch sings at a faster tempo. In addition to the overall rate of singing, the House Finch’s song is given as a headlong warble without pauses or dramatic changes in notes. The Song Sparrow is more measured, lingering on certain notes before moving deliberately and crisply to the next.

One way to notice the difference in tempo is to imagine that you are the conductor of the orchestra. Try holding up a finger and keeping time with the bird’s song.

Tempo, like pitch, is usually not a field mark by itself, but paying attention to differences in tempo and the resulting rhythmic patterns is one of the keys to developing your bird song identification skills.

All of the recordings linked in this series are from the collection at Xeno-canto http://www.xeno-canto.org. This outstanding resource features the work of thousands of dedicated naturalists, all presented in an intuitive and functional website.