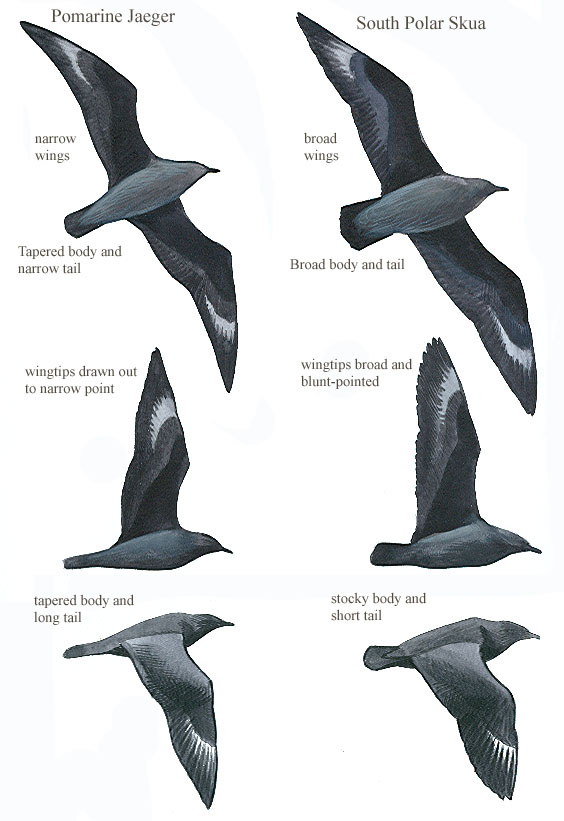 I was intrigued by this problem in light of the discussion surrounding the recent (6 November 2004) bird from southern Texas (see photos here and here; and sincere thanks to Martin and Chris for making these photos available and thanks to all who have participated in the discussion and our collective education). We wouldn’t think of this as a challenging identification problem, but this is not the first time a contentious jaeger/skua has been seen. This bird was identified from a boat as South Polar Skua, but several people who saw the photographs raised questions, and an extended online discussion on the Texas listserve has failed to establish any consensus on the identification of the excellent photos. I found the Texas photos genuinely confusing, and started some research just to help myself understand the challenge.

Too often the discussion of shape and proportions is simply a vague and subjective claim of “broader wings” or “large head” which is very little help to an inexperienced observer, and sometimes misleading. In this case I think the appearance of a larger head on the skua is mostly an illusion created by the broader body (thicker neck) and shorter tail, so that an observer trying to identify a skua by its “large head” should be concentrating instead on other things. In the illustration below I have compared Pomarine Jaegers on the left and South Polar Skuas on the right in flight in three different views, based on multiple photographs. Some of the differences noted are well-known, others are not.

Here are the differences in no particular order:

These differences in shape and proportions seem quite consistent across series of photographs, and I suspect there is no overlap between Pomarine Jaeger and South Polar Skua, although the differences can be very hard to interpret from a moving boat and/or from a few photographs.

As for the Texas bird that started this research, plumage is an important part of the discussion. As Martin Reid has argued that bird’s plumage – with apparently unbarred gray-brown body and head contrasting with solid dark underwing coverts – is wrong for any morph or age of Pomarine Jaeger but perfect for South Polar Skua. So the Texas bird seems to have the shape of a jaeger and the plumage of a skua, and which feature is more reliable and carries more weight in the identification is still an open question.

Helpful collections of photographs are at Brian Patteson’s Website and at Dick’s Birds. Also in books, especially Olsen and Larsson, 1997, Skuas and Jaegers.