Skip to content
The Greenland Greater White-fronted Goose (Anser frontalis flavirostris) is known to be a rare visitor to northeastern North America, but I have never been satisfied with a reliable, objective way of distinguishing it from the North American subspecies of Greater White-fronted Goose, also a rare visitor to the northeast.
Bill color is the most frequently-mentioned field mark – supposedly orange on Greenland birds and pinkish on North American – but this has been refuted multiple times (see Kenn Kaufmann’s note in Birding 1994, my blog post here). I suspect this is a mark that works in Europe, where local White-fronts are reliably pink-billed, but not in North America, where lots of the local birds look more or less orange-billed.
Over the last few weeks a single adult White-fronted Goose has been frequenting farm fields near my home in Concord, Massachusetts, and about a week ago it was joined by a second bird (well… “joined” is an overstatement since they pay no attention to each other and keep apart in the big flock of Canada Geese).
These two individuals, in their details, are really strikingly different, and the differences all lead me to the conclusion that the new arrival is a Greenland bird, and the other a North American bird. On 19 November I was able to get some photos of the Greenland-type bird, and I’ve annotated a photo here with the differences between it and the North American-type bird. The differences are listed simply from front to rear, not in order of importance. (I’ll try to get some photos of the other bird to post here for comparison). 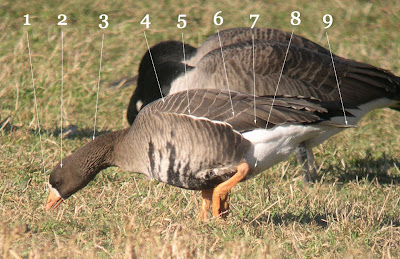 Presumed Greenland Greater White-fronted Goose, 19 November 2008, Concord, MA. Photo by David Sibley
Overall the Greenland-type bird appears bulkier, heavy-billed and thick-necked, and darker, without the elegant white fringes that are prominent on the rear upperparts of the North American-type. 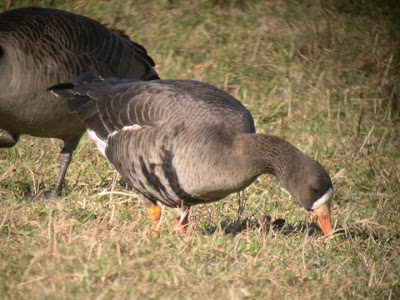 Here’s another photo of the Greenland-type bird, showing the heavy orange bill, dark and thick neck, and the lack of contrasting edges on the feathers across the shoulders. But none of that is very helpful in a single photo without another bird for comparison, nor is it likely to be very helpful on a single bird in the field.

I know that some of these things have been described before, and they are still pretty subjective, and it’s not safe to generalize from a single individual, but if this is a typical Greenland White-front, then I feel more hopeful about identifying the subspecies.
notes:
Martin Reid’s website has some other discussion, photos, and lots references