Skip to content
The primary challenge of distinguishing Canada from Cackling Goose centers on the intermediate-sized ‘Lesser’ Canada Goose, B. c. parvipes, which reportedly nests across the boreal forest regions of western Canada and interior Alaska (more details on my website here). I’ve seen a few birds that I thought were ‘Lesser’ in the northeast over the years, most convincingly one at Brigantine NWR in NJ that accompanied a big flock of Snow Geese rather than flocking with Canadas. But it’s a pretty ambiguous subspecies. The identifying features are wholly subjective: anything that seems smaller than the regular Canadas but too big for Cackling is a candidate for ‘Lesser’ Canada. Recently I saw this bird (the one on the left) that I feel pretty confident is a ‘Lesser’: 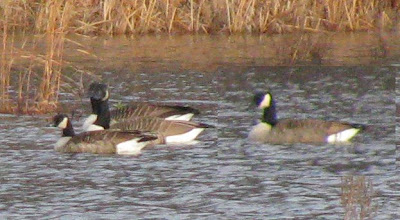 click for a slightly larger image.
16 November 2008, Great Meadows NWR, Concord, MA – photo by David Sibley. Taken with the 10x zoom on a Canon digital camera. The Canada on the right was a bit farther to the right in the original photo, I cut and pasted it closer for better comparison.
It was distinctly smaller than the Canadas around it, with a very short neck and short bill. In flight going away it appeared no more than 2/3 the bulk of the Canadas next to it. Whenever I scan Canada Goose flocks in the east looking for Cackling Goose, there are always a few birds that grab my attention because they look small. Often they are marginally smaller than the other Canadas, sometimes their smallness was an illusion (happened to be standing in a furrow, next to an unusually large goose, etc). After a closer study these “small” birds fit nicely into the normal range of variation of the local Canadas, and the impression of smallness vanishes. This bird stood out because its smallness held up to closer scrutiny; it was truly small with very short neck and short bill.
I called it a Canada rather than Cackling because it seemed just a little too long-billed, too large overall, and the head/bill too wedge-shaped for ‘Richardson’s’ Cackling Goose. It also looked the same color as the Canadas around it, without the gray sheen on the back or golden cast on the breast that many ‘Richardson’s’ show.
There are very few reports of ‘Lesser’ Canada Goose in the northeast. This could be due to the difficulty and inherent uncertainty of identification: we identify only the most clear-cut examples and report those tentatively, if at all. Or maybe it’s because few birders really look for them or follow-up on possibles since “it’s just a Canada Goose”. Or maybe they are truly rare. I have actually seen more ‘Richardson’s’ Cackling Geese in the northeast than convincing ‘Lesser’ Canadas; but that could be due to any of the reasons above. Given the normal distribution of this subspecies – breeding farther south and west than ‘Richardson’s’ Cackling, with shorter migration – I would expect it to be less frequent than ‘Richardson’s’ on the Atlantic coast, at least in the north. The only way to figure that out is to keep watching for, and documenting, these small geese, in order to develop a better sense of the identification and status of the various subspecies.

4 thoughts on “Lesser Canada Goose in the northeastern US”