See my detailed discussion of White-crowned subspecies here, which needs updating with the information below.

In early May 2011 I spent several days in southeastern Arizona, and devoted a lot of time to studying the White-crowned Sparrows. At that date most of them were migrant Interior West birds of subspecies Z. l. oriantha. Most of the local wintering population of Western Taiga subspecies Z. l. gambelii had already migrated north, but a few were still present and offered excellent comparisons. On 1 May I watched and photographed a few dozen birds at the San Pedro House feeders, and discovered a number of differences (details and photos below).

The Interior West subspecies oriantha has sometimes been considered the same subspecies as the Eastern Taiga leucophrys, because they were thought to be indistinguishable by appearance, but lumping them makes no sense biogeographically. My study of these birds revealed (as I suspected) that the Interior West birds differ in a number of subtle but significant ways from the Western Taiga birds. In contrast, Eastern Taiga birds have always struck me as simply dark-lored ((It is worth noting that the term “lores” is used loosely here, the color difference in these sparrows is largely above the lores, on the supraloral, but it’s easier and at least partly correct to call it the lores.)) and pink-billed versions of Western Taiga. So presumably all of the differences noted here (aside from bill color and lore color) should work to distinguish Interior West from Eastern Taiga, but that remains to be tested. 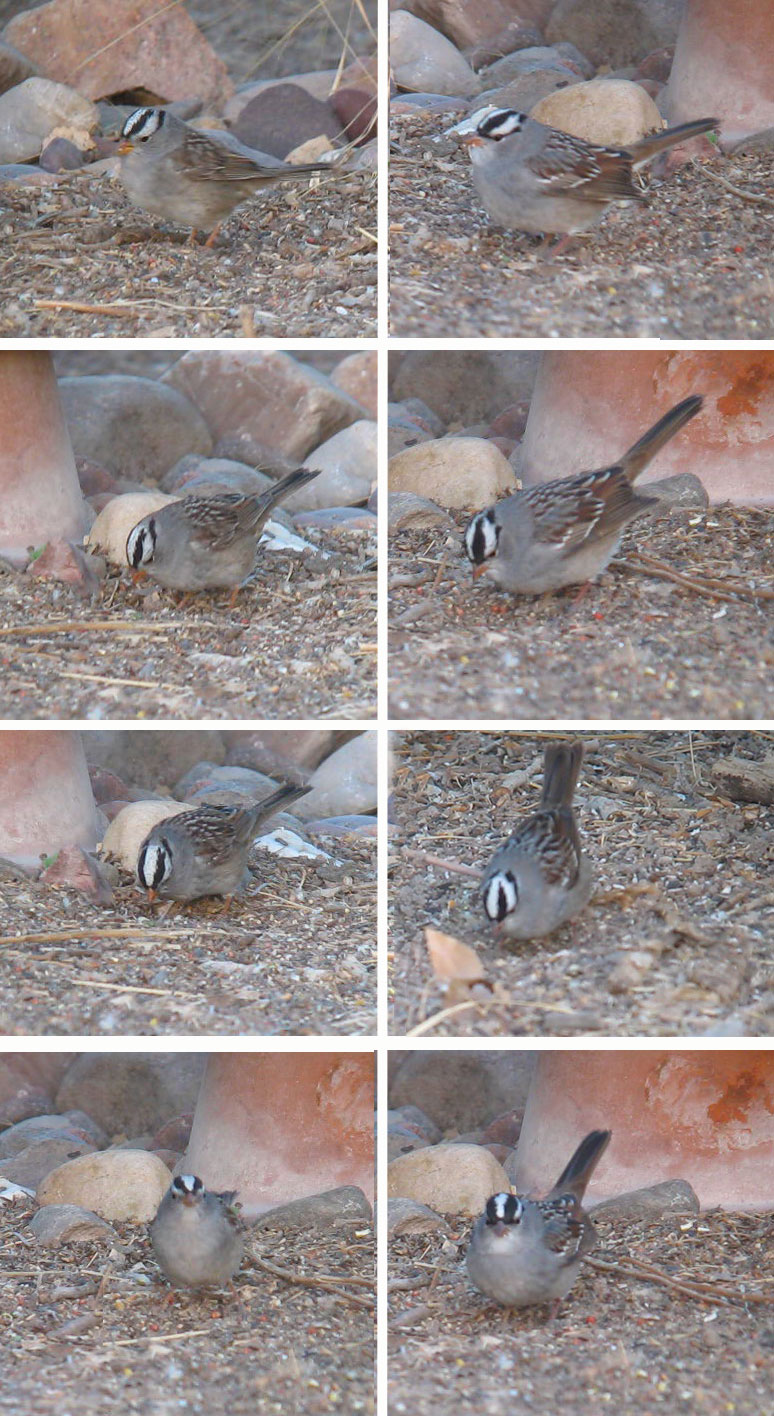 Some variation in Interior West birds involves pale gray invading from below, and may represent intergradation.

This is surprisingly difficult to ascertain. Similar to the Greater White-fronted Goose subspecies problem, an orange-billed bird stands out among a group of pink bills, but then scanning and trying to quickly sort birds on bill color is impossible, and judging bill color on a lone bird is difficult.

This is fairly obvious when comparing the two subspecies side by side, but probably much more difficult to judge in isolation.

Photos don’t show this very well, but it was obvious in the field. Females have distinctly drabber crown patterns than males, and it’s possible that the few remaining Western Taiga birds in this location were all females. This deserves more study.