Thanks to reader Skip Pothier for sending in these photos. They show a Purple Finch with yellow color instead of red. My first thought was to call it a male that didn’t develop the full red pigment (a similar variant due to poor diet and/or poor health is fairly common in male House Finches) but the answer here may not be so simple.

Birds get red and yellow pigments from carotenoid compounds in their food, so a diet that doesn’t include enough carotenoids will lead to a bird with weaker color. The same carotenoid chemicals are also important for immune system function, so a sick bird can also show weaker color. Even if it gets lots of carotenoids in its diet, it will use them to fight disease and won’t have enough left to color the feathers.

On this bird, however, the explanation may not be that simple. On closer study I notice that it shows some thin streaking on the sides of the breast. This is more than a male would usually have, but far less than a typical female. This kind of variation in streaking (which involves melanin pigments) is usually controlled hormonally – adult males with lots of testosterone would grow breast feathers with no streaks, all other birds (females and immature males) grow feathers with broad brown streaks.

If this bird is hormonally intermediate, that could also conceivably explain the yellow color. It could be a male that was not producing enough testosterone as the new feathers grew during its last molt, or it could be a female producing a lot of testosterone. The existence of “male-like females” is known in waterfowl, and those are generally assumed to be older birds that grow feathers with some male-like colors and patterns. I’m not sure how we could distinguish a male from a female in these photos, given that the bird is abnormal.

As mentioned above, yellow color is fairly common in male House Finches, with birds showing a full range of color variation from red, to orange, to yellow, but no obvious differences in plumage pattern, suggesting it involves only carotenoids and is all diet-related. In Purple Finch yellow color is very rare, and often comes along with abnormal streaking, which may mean that it is hormonal.

Why don’t male Purple Finches show a simple “carotenoid-limited” yellowish color more often? Are Purple Finches healthier than House Finches? Do they have an easier time getting the necessary carotenoids in their diets? Or is there a fundamental difference in the mechanism of red coloration in the two species?

Some other examples of yellow Purple Finches from around the web

Below is one photo apparently an Eastern bird in Jan 2010 – photo copyright Stanley York; here alongside a typical female showing the difference in extent of streaking on the breast. Click to see the full size photo on Flickr. 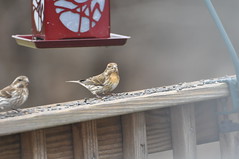 Below is an Eastern bird from NS in May 2010; photo copyright Maxine Quinton. Click to see the original photo and more examples on Flickr. 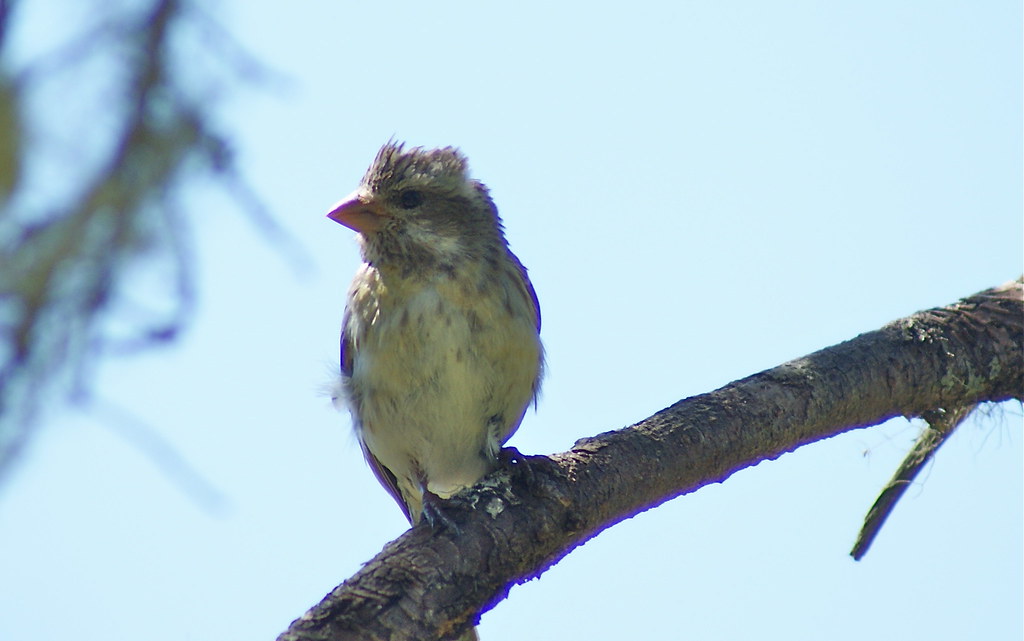 http://www.redhawksquest.com/?p=1472 – apparently a Western bird in Feb 2009 (click the link then scroll down for photos). This looks more like a male that has simply reduced the normal red color to orange.

Thanks to Skip Pothier for sending the photos and for help with web research.

18 thoughts on “A Yellow Purple Finch in Ontario”