On my usual birding circuit on the morning of 26 May 2015, along the Assabet River in Concord, MA, I heard the distinctive song of a Mourning Warbler. This species is a rare but regular migrant through the area, so finding one is a highlight any day, and I set to work to try to see it. The song was coming from a dense tangle of honeysuckle and multiflora rose, but the thick vegetation was only a narrow strip along the river, and in less than a minute I saw the bird fly across an opening. That was easier than I expected, and in a few more seconds I had some partial views of it through the vegetation.

What I saw was not what I expected, however. Instead of the uniform gray head and dark face of a male Mourning Warbler, this bird had a pale gray face, conspicuous thin whitish eye-arcs and a clean white throat! There was also a striking oval black breast patch. This black patch is normal for Mourning Warbler, but it usually goes along with dark gray (and even some mixed blackish) on the throat, and doesn’t stand out very much. On this bird it was really obvious against the white throat. 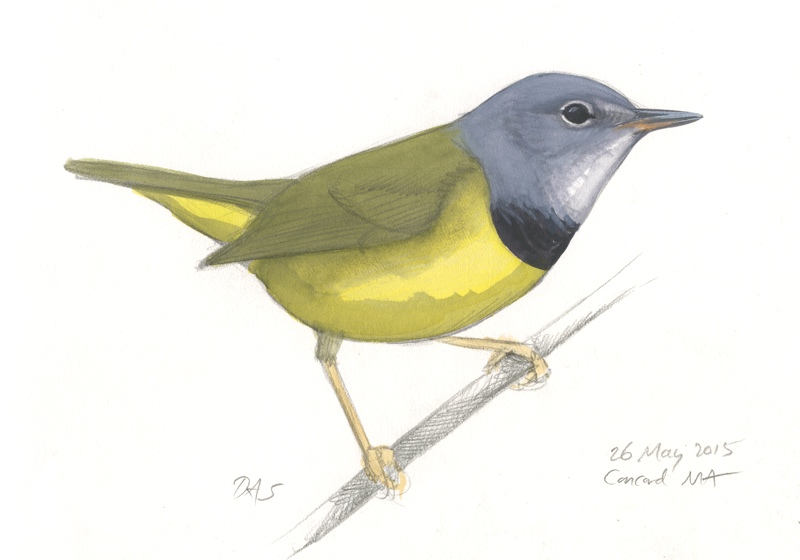 That deserved further study, so I spent the next fifteen minutes tracking it through the tangles, and got some decent looks, always brief, and no chance for photos. After that it went silent. I was not able to locate it again, and there was no sign of it the next morning.

I did make a recording of the song, which sounds fairly normal for a Mourning Warbler (of the “Eastern regiolect” as defined by Jay Pitochelli here). It was extremely variable in its singing, and most of the songs sounded weak and half-formed, as if practicing, but that is normal for a migrant that may be hundreds of miles away from its breeding grounds. At about 20 seconds in this recording is a weaker, much lower-pitched short snippet of song. The bird was doing things like that throughout the observation.

It gave one bout of call notes (unfortunately not recorded) and those sounded odd – relatively long and scratchy for a Mourning Warbler.

Overall it looked big and robust, and aside from the head pattern and the call notes nothing struck me as wrong for Mourning Warbler.

Maybe it was just a weird Mourning Warbler, possibly a first spring male that failed to molt breeding-plumaged head feathers, or (less likely) a female that has acquired some male plumage and also sings a little. The possibility of a hybrid is also worth considering. There are a few records of Common Yellowthroat X Mourning Warbler (Connecticut, New York, and Quebec) and all three had clean white throats. A hybrid would also explain the odd call note. But a hybrid should have more black around the eye, not less, and I think I would have noticed something yellowthroat-like about the bird’s proportions or behavior.

I wish I could have studied it longer. As it stands there are details that conflict with each of the possible answers, and a more lengthy observation probably could have resolved that. It remains a mystery, at least for now.

11 thoughts on “An interesting warbler”