Here is a classic optical illusion – the three horizontal lines in the image below are all the same length. Yes, they are identical (move your cursor over the image to see the proof). 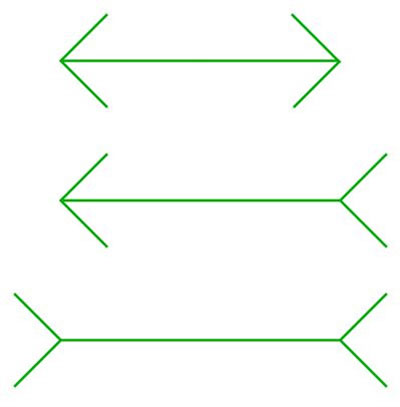 I’ve been pondering this illusion and wondering how often we see similar effects in bird identification. I suspect that a lot of our judgment and subtle perceptions of shape and proportions are influenced by color patterns like this, although in very slight and unnoticed ways.

The best example I’ve found so far is the head shape of Cooper’s and Sharp-shinned Hawks. It is often said that these two species can be distinguished by the fact that Cooper’s Hawk has a “squared-off” head, and Sharp-shinned a more rounded head. This subtle difference can be seen in the drawings below. 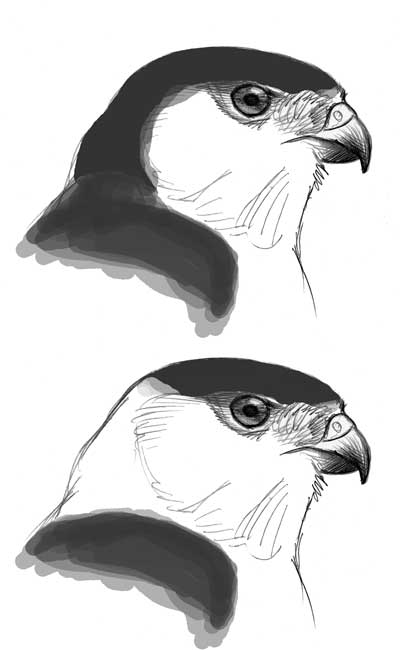 The problem is that these two heads have exactly the same outline. Move your cursor over the image to see the plain pencil outlines. The impression of a more rounded head on this Sharp-shinned Hawk is entirely the result of the color pattern. On Cooper’s Hawk the dark color stops at the rear crown, dividing the head into two parts just at the point where it curves from crown to nape, and creating the illusion of a sharper corner.

In reality, there is a subtle difference in the head shape of these two species, but it is greatly enhanced by the color pattern; something to keep in mind the next time you think you’ve noticed a difference in shape on a boldly-patterned bird…